The species was red-listed in November 1999 through an emergency COSEWIC process. Current estimates of breeding adults are at less than 300 for British Columbia. A Recovery Team will begin to address some of the issues surrounding the decline of the Oregon spotted frog by conducting inventory activities at candidate sites, mark-recapture efforts, and developing effective captive rearing techniques for possible reintroduction.

My research will focus on the factors influencing the early life history of the Oregon spotted frog, in southwestern British Columbia. The species is extremely rare in the Pacific Northwest and various explanations have been offered for its precarious population status, including bullfrog predation, habitat loss, spread of exotic plants, and changes in wetland hydrology due to development. I will experimentally evaluate the survival of spotted frog tadpoles to determine if competition from other anurans, predation by common wetland animals, or behavioral characteristics are possible causes of mortality prior to metamorphosis. Through my research I hope to gain insight into factors that are influencing larval survival that may be addressed through a long-term conservation plan. 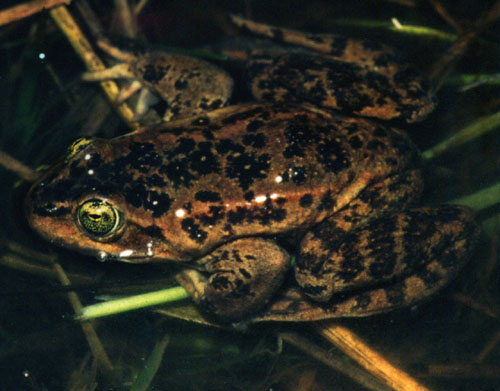