Tiger salamanders in the south Okanagan of British Columbia, Canada.

Article from Species at Risk Conference

The only places you will find tiger salamanders (Ambystoma tigrinum melanosticum) in British Columbia are in the arid Okanagan and Similkameen valleys of the southern interior. Extensive habitat alteration by cattle ranching, fish introductions, housing development and water withdrawal have contributed to apparent declines from historic observations in this region. Tiger salamanders are red-listed in BC (considered to be Endangered, or Threatened with local extinction) yet information on their habitat needs is lacking, particularly information concerning the terrestrial habitat of adults.

Adult tiger salamanders return to natal ponds in early spring to breed. After breeding they return to the arid grasslands (Figure 1). Being nocturnal and fossorial (meaning they burrow into the ground), the movements and whereabouts of tiger salamanders during most of the year are not well known. Tiger salamanders lay their eggs singly or in small clusters on vegetation in ponds and are therefore difficult to detect. The young develop quickly and may grow up to 25 grams in the span of a several weeks. Many of the ponds were they occur dry out by mid summer. At this time, those larvae not yet metamorphosed into the terrestrial juveniles will die. Juveniles leave the moist lush habitat in and around the ponds to spend the majority of their adult life in the grasslands (Figure 2). Juveniles leaving the ponds must avoid the temperature and moisture extremes at the soil surface and seek shelter underground. Many find their way under ground through openings made by small mammals. Pocket gophers, (Figure 3) for example, dig extensive tunnel systems and large soil mounds at the surface. Salamanders have been found in these small mammal burrows and mounds of loose soil.

We used drift fences and pitfall traps to census adult tiger salamanders returning to ponds in the spring. Larvae and juvenile tiger salamanders were captured using floating fish traps in several ponds and drift fences at the pond edge. Radio transmitters have been implanted into several adult tiger salamanders. This has allowed us to track their movements in grasslands and document their habitat use. We have also documented the variation in size of young and adults that characterizes different ponds in the area (Figure 4). It is apparent that the ponds are unique in terms of the size and productivity of salamander populations that they support. Determining what habitat features may determine these differences may help us to manage and conserve this species. It may even allow us to revert degraded habitat back into habitat suitable for sustaining viable populations in the future. 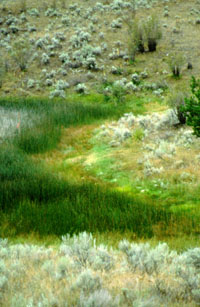 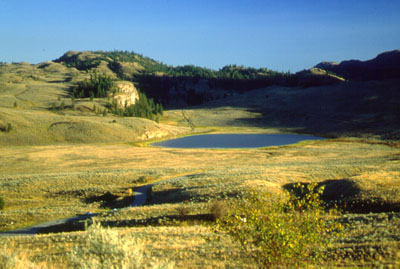 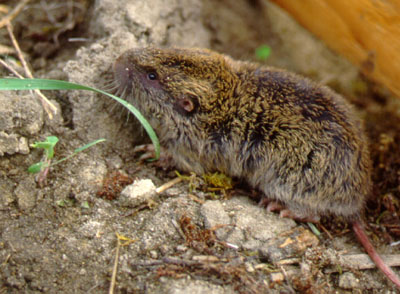 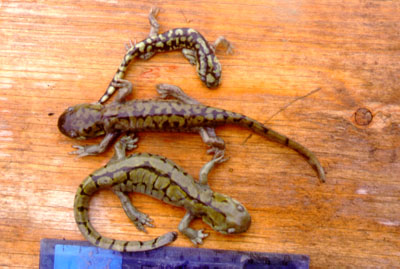