Despite many studies of tailed frog larvae (Ascaphus truei), there has been little study of juvenile and adult habitat use, patterns of movement, and dispersal. The primary objective of this research was to determine if clear-cut timber harvesting has any effect on the movement patterns of tailed frogs by comparing movement rates, distance and direction in clear-cuts to that occurring in relatively undisturbed forests (mature second growth stands). Grids of pitfall traps and drift fences were established in six sites: three mature stands (>81 years) and three clear-cut habitats (<5 years) to determine if: (1) movement became limited to upstream/downstream activity only within the immediate riparian area in clear-cuts without riparian buffers, (2) tailed frog abundance was lower in clear-cut stands than in mature stands, and (3) pre-reproductive juveniles were the main dispersers. A brief synopsis of preliminary analysis (based on 1998 data) is presented below. Further trapping was also carried out in May of 1999 to detect any significant deviations from the 1998 trends. Final analysis will also incorporate environmental and habitat variables such as correlations with downed woody debris, canopy closure, vegetation cover, precipitation, and temperature.

Abstract for oral presentation given at the Society for Conservation Biology conference in Washington, DC, June 1999 (results reflect analysis based on 1998 data only)

Pitfall trap grids with drift fences were established in three mature stands (>81 years), and three clear-cut habitats (<5 years) in southwestern British Columbia to assess whether abundances of tailed frogs (Ascaphus truei) were lower in clear-cuts, with movement limited to within the immediate riparian area. Pre-reproductive juveniles were expected to be the main dispersers. Mean proportion of captures between the two habitats was similar. In clear-cuts, 74% of captures were pre-reproductive juveniles, and the greatest proportion of frogs moved downstream. In mature stands, age classes were evenly distributed, and the greatest proportion of frogs moved upstream. In clear-cuts, capture rates were similar at all four distances from streamside. In mature stands, significantly fewer frogs were caught at the traps furthest from streamside (65-m). Mark and release techniques indicated that frogs caught within the study sites were predominantly new individuals moving through the area. Fisher-Exact test indicated that a significantly greater ratio of recaptures in mature stands originated from other locations, whereas in clear-cuts, recaptures consisted of frogs which returned to traps immediately upon release. These findings suggest that juveniles are more active and travel greater distances in clear-cuts, which may have long-term implications on population maintenance if disperser survivorship varies significantly from that occurring in relatively undisturbed (mature) habitats. 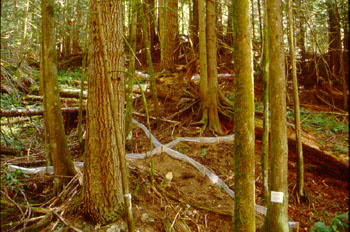 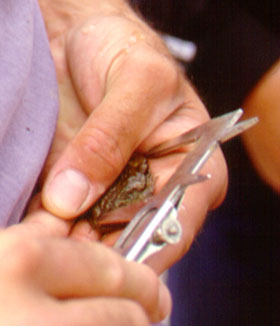 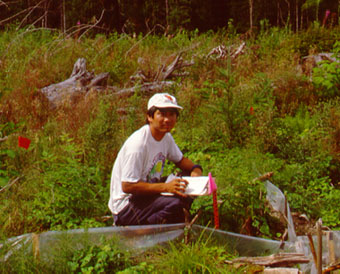